Heinen acoustic doors in the A.B. for 25 years !

In our kingdom the Ancienne Belgique is a real monument. There are few who do not know the mythical hall or who have never had the occasion to listen to a concert by one of the countless artistes and groups who performed there. The hall is celebrating its 40 years and, for the occasion, the organisation has seen big and planned a maximum of events! To discover them, don’t hesitate to check out “ab40” on the concert hall site!

This anniversary, rich in colour, is the occasion for Heinen to recall that its acoustic doors were installed there 25 years ago! Taking advantage of this opportunity, we asked the building management coordinator, Jasper Plaetinck, about the quality and efficiency of Heinen acoustic solutions.20 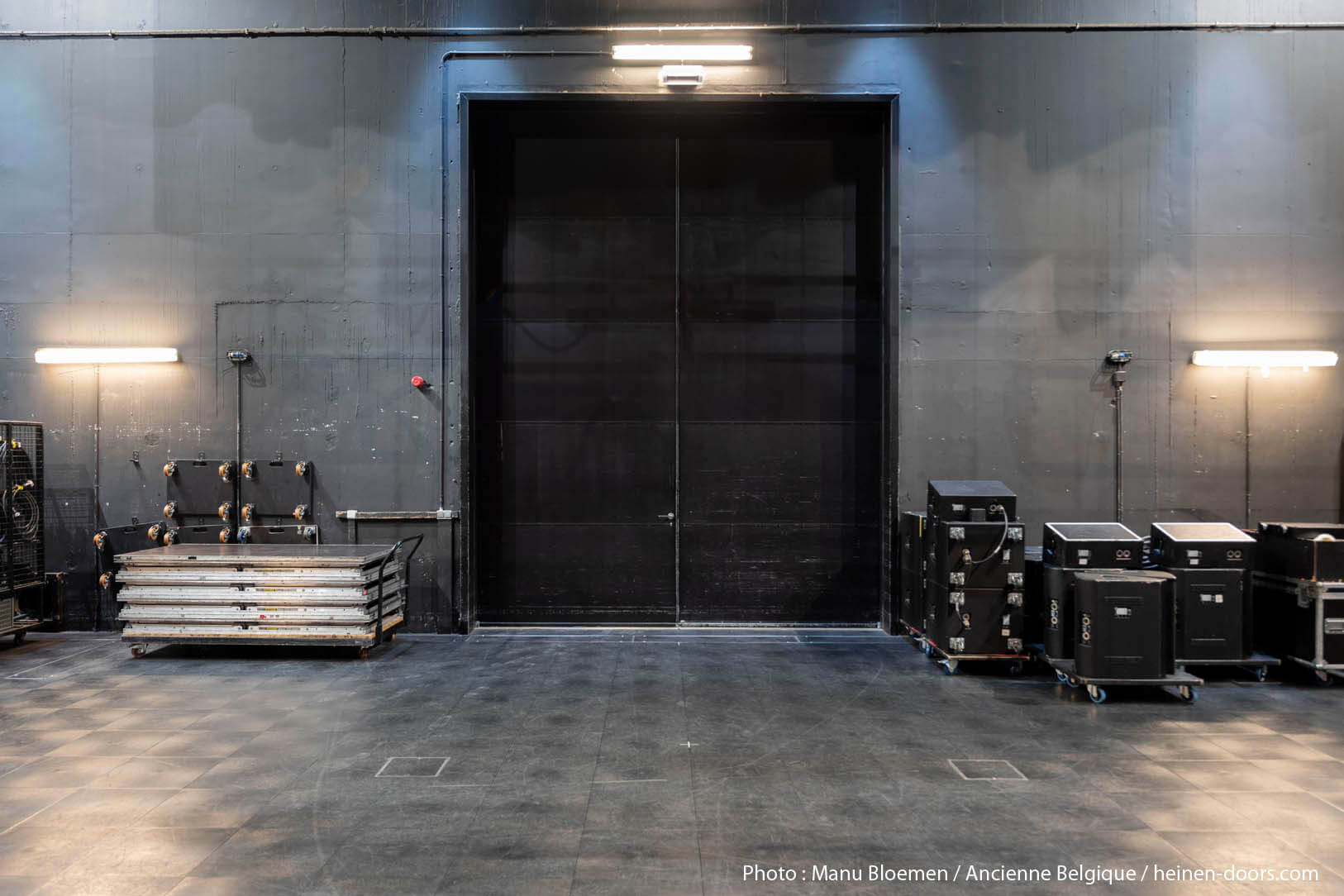 Hall of a merchant’s house in the late Middle Ages, brasserie concert in the 19th century, then, by turns, cinema, dance hall and review theatre between the wars, the Ancienne Belgique therefore very soon became a place bathed in music and culture. Rebuilt and enlarged, the hall has seen performance by such legendary artistes as Édith Piaf, Georges Brassens, Jacques Brel and Charles Trenet. Johnny Hallyday or Claude François would later also tread the boards with success.

Its first incarnation ended when its owner had to invest massively in safety following a fire in the Innovation in 1967. The costs were too high and he had to file for bankruptcy in 1971. However, the place rose from its ashes at the very end of the 70s and was bought by the Flemish Community. The renewal is striking and a whole series of internationally famous English-language artistes have performed there: Lou Reed, Iggy Pop, Scorpions, the Ramones and many more besides!

Unfortunately the hall had to deal with complaints about noise. At the risk of being closed down it began new sound-proofing works during the 90s. The hall held steady during this difficult period; the works began in 1992 and would last until 1996; it was during this period that the Heinen doors were installed. 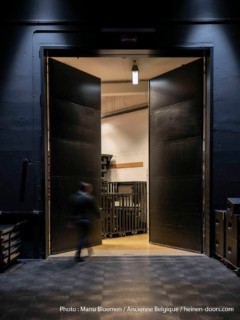 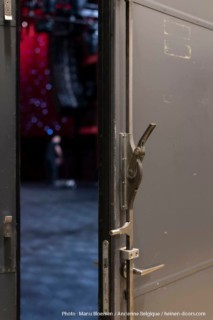 Acoustic doors for the renovation

After 25 years of use we wanted feedback from an expert who looks after the Heinen doors every day. So we put a number of questions to Jasper Plaetinck, coordinator of the management of the buildings for A.B.

Why did you choose the Heinen doors for the renovation during 92-96 ? How was this choice relevant as a factor of protection of the building of the Ancienne Belgique and its visitors?

Jasper Plaetinck: they were chosen thanks to the advice of an acoustics consultant, because they offered good acoustic performance. The door sills play a very important part for us and the doors should be able to be completely insulated in that respect. They were also known to be resistant and made of high-quality materials, combining acoustic and firebreak properties.

As a daily user and “manager” of Heinen doors, what qualities have you seen in this product?

Jasper Plaetinck: The sound insulation is crucial for a concert hall such as the Ancienne Belgique. Whether it’s to protect the public, the personnel and all of the local Brusselaars. For us, it’s important that the Ancienne Belgique is situated in an urban environment, but without that having a negative effect on the people who live around us. You immediately notice a considerable sound difference when the soundproofed doors are open or closed during a concert ! 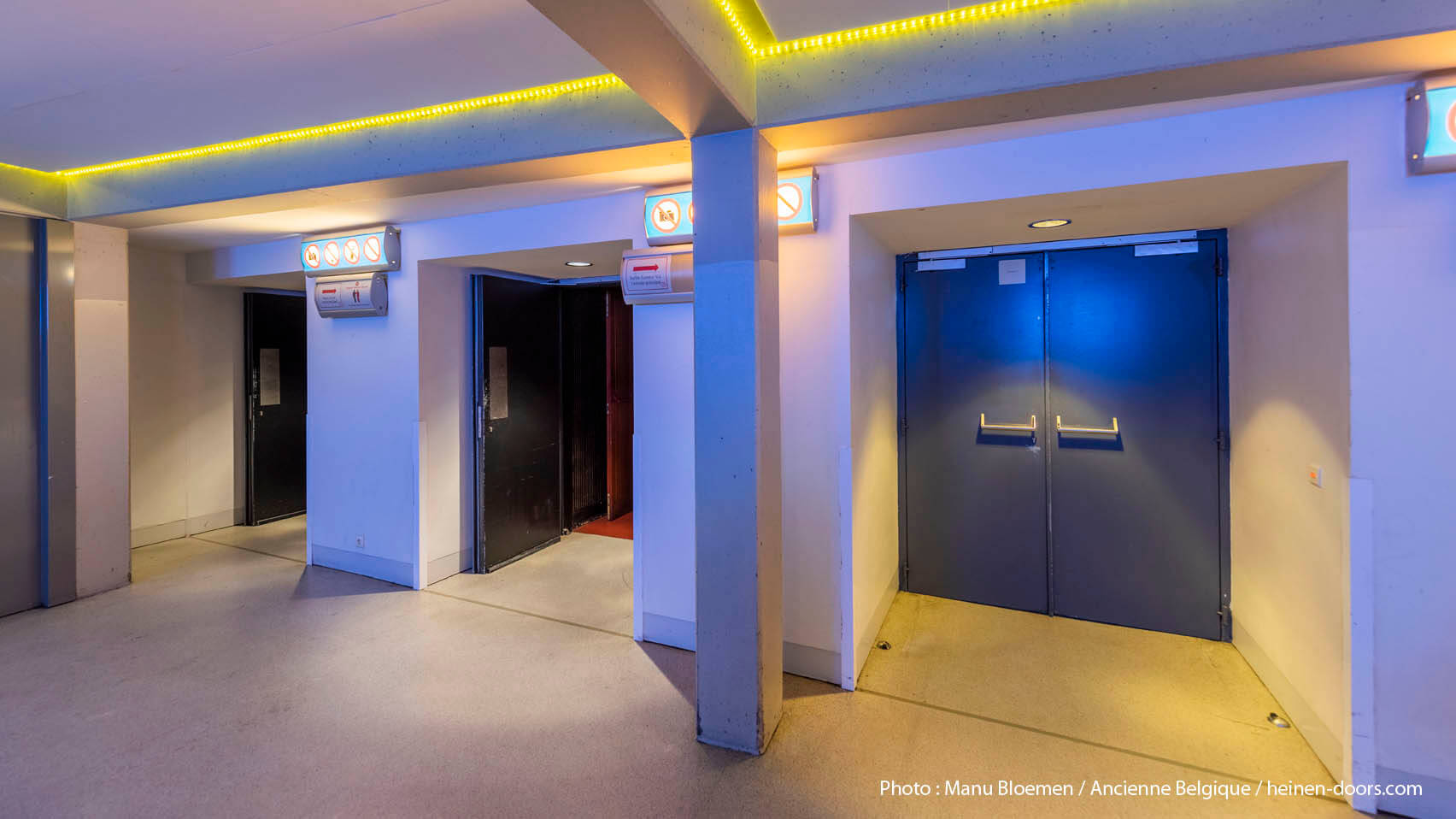 During these 25 years of use have you ever had to replace or repair the doors? If so, why and in what context?

Jasper Plaetinck: only the accessories, such as the door-closers, screws and such have had to be repaired, mainly because of wear from the intense and frequent use of the doors.

Would you recommend Heinen for other concert halls?

Jasper Plaetinck: Absolutely! The quality of the doors is crucial, but the maintenance and periodic inspections (correct closing of the doors, checking the acoustic sills, adjusting the door-closers) are also necessary. Heinen is therefore an important partner for the good running of our buildings.

How does the Ancienne Belgique manage its sound problems in the heart of Brussels?

Jasper Plaetinck: an acoustics consultant guided us through the last big renovation to ensure the highest level of sound insulation for the concert halls. A number of studies were also carried out in the past, after which certain measures were taken. For example, an organizational measure consists of ending the concerts at 22:30 exactly. This circumstantial measure has had an impact in the neighbourhood: the local inhabitants know that the AB is quiet after half past ten!

How many times has a Heinen door been opened in these past 25 years? Do you have any idea of the yearly average?

Jasper Plaetinck: The main hall has 3 entrances. There’s about 150 concert nights a year (now it’s almost daily, while it used to be about 3 or 4 times a week). If you multiply that by 23 years (from 1996 to 2019) and by an average audience of 1 500 (the maximum capacity is 2 000, but the house isn’t always that full) and allowing for the fact that the visitor will use the door on average 6 times (entering, drinks, going to the toilet, end of the preprogramme, start of concert, end of concert), divided by the number of doors (3), you get 10 000 000 uses, an that’s without including the number of times that the staff and suppliers use them throughout the day! 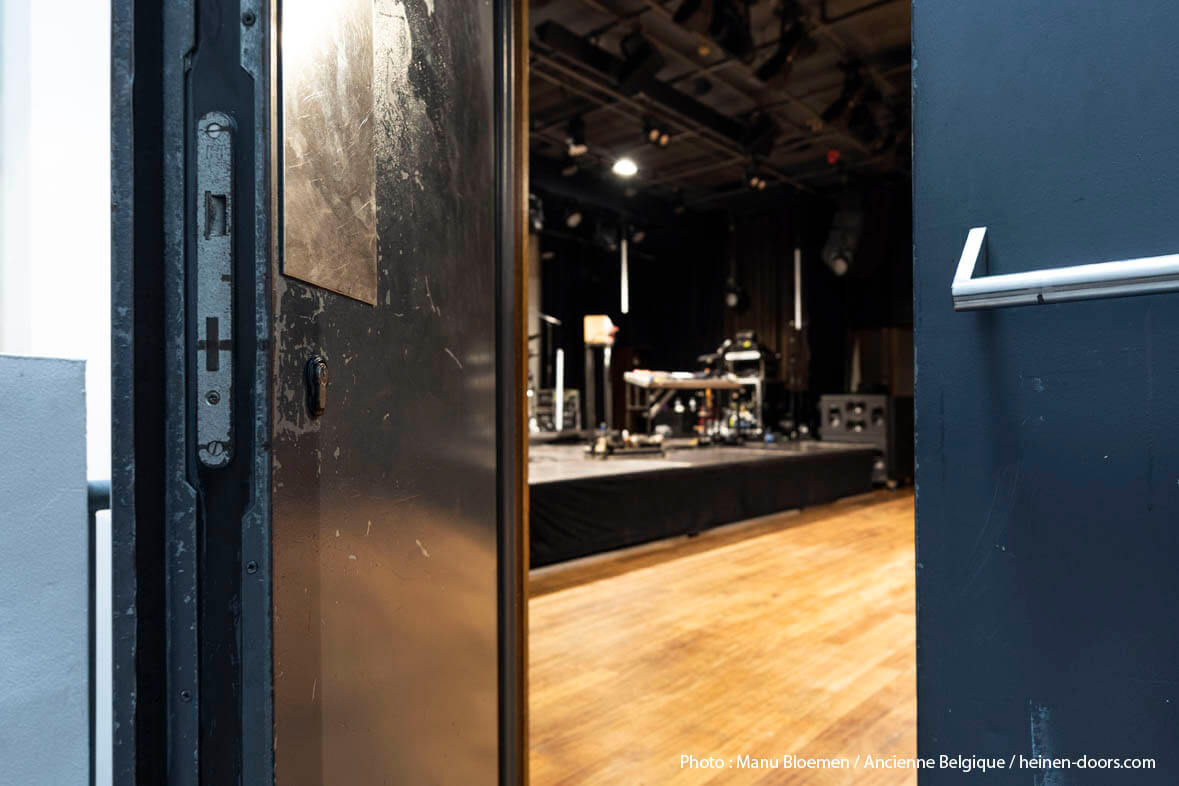 So the AB is satisfied with its product. If, like them, you need versatile acoustic doors, or any other product, don’t hesitate to contact us!

In terms of performances, Heinen doors reach a sound insulation of RW 36 to 55 dB for the single doors and RW 39 to 53 dB for the double doors